We glady invite PhD students to submit their abstracts for papers. Extended deadline: 7 March. Look under "Submissions" for more information Prof. Rhacel Salazar Parreñas is a professor of Sociology and Gender Studies at the University of Southern California. Her areas of research include labor, gender, international migration, the family and economic sociology. Situated in the intersections of human trafficking and labor migration, her more recent works focus on the construction of migrant workers as “unfree laborers”.

Across the globe, migrant domestic workers are unfree workers whose legal residency is contingent on their continued employment as a live-in worker with a designated sponsor. This keynote examines the politics of their indenture. Providing a macro and micro perspective, it begins with a global overview of the incorporation of migrant domestic workers as indentured workers in key host countries in the Americas, Asia, Europe and the Middle East, explains the cultural logic that undergirds their indenture, and then describes the conditions of domestic work in the ‘worst destination’ of the United Arab Emirates, where absconding is illegal and quitting one’s job requires a sponsor’s permission. This talk interrogates various theoretical frameworks for thinking about contemporary unfreedoms – slavery, human trafficking and structural violence – and proposes the alternative concept of “indentured mobility,” which recognizes the personal gains made by migrants in the face of servitude. The concept of indentured mobility foregrounds the agency of migrants, acknowledging how they choose the unfreedom of servitude as a better option over the unfreedom of their poverty in the Philippines. 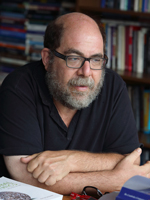 Prof. Daniel Weinstock is a professor of Philosophy at McGill University. Weinstock’s research explores the governance of certain types of liberal democracies and the effects of religious and cultural diversity from an ethical perspective on the political and ethical philosophy of public policy. His areas of interest include social and political philosophy; ethics of public policy; ethics of nationalism; foundations of international; ethics politics of language and identity.

Many political philosophers today are questioning the “ideal theoretical” approach that has dominated Anglo-American political philosophy since at least the publication of John Rawls’ Theory of Justice. More attention is now being paid to the radically imperfect nature of the moral agents for whom political institutions must be designed, to the path-dependency imposed upon normative thinking of the imperfect institutions around which contemporary societies, including liberal democracies, have been constructed, and to a wide range of empirical feasibility constraints that constitute parameters within which normative thinking must occur. Thus far, the implications of this new set of approaches and methodologies have made themselves felt with respect to questions of distributive justice and of political legitimacy. My intention in this paper is to reflect upon what the implications of political realism and non-ideal methodology are for the question of migration. Specifically, I will attempt to answer the following questions: Can one be a cosmopolitan with respect to migration while affirming these methodological and meta-ethical commitments? And what sets of policies with respect to migration should a realist and non-ideal theorist argue for?